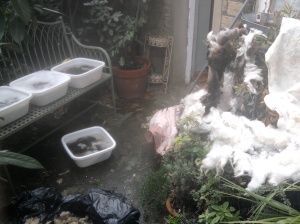 I’ve been washing my first fleece today! I got a Jacobs fleece from Saxby Rare Breeds in Leicestershire and it is lovely, but very dirty! Now then, my spinning mentor is a firm believer in not washing fleeces and to spin ‘in the grease’ but having washed a wee bit just to see what would happen I was happy to wash the rest of it – there were plenty of oils left in it and spinning it was much more of a pleasure. I’m fortunate to have access to a couple of the country’s experts in archaeological textiles; except the advice of one was “Well, the Romans washed their fleeces, but they were anal about everything.”

I filled a bowl three-quarters full of hot water – as hot as the tap would go – and added a good squirt of washing up liquid (a co-op version – Lime and Ginger as it was at my sink! The bowls are the value ones from Tesco). I wore washing up gloves and not least because the water was so hot. I pulled off a quantity of the fleece – not enough to fill the bowl, but a good foot and a half or so. I pushed it under the surface and that was it – I did not touch it again. After 45 minutes I filled another bowl with more very hot tap water but this time no washing up liquid. I lifted the fleece out of one bowl holding the weight of the fleece as the liquid drained away and then transferred it into the other bowl, again pushing it under the surface and then not touching it again. After half an hour I transferred it to another bowl just the same as before. After another half hour I lifted the fleece into a pillow case and knotted the top and put it into the spin cycle of my washing machine. My scraggy lump of fleece ten minutes later was a soft pillow case full of fluffy white loveliness!

Whilst it wasn’t raining and not having a rack and the bench being covered with bowls, I laid the fleece on the plants around the yard, turning them over every now and then to dry off. Once the rain kicked in I let them dry in the house lying on a towel. There still seems to be a few bits and pieces of debris amongst the fibres but I have been reliably informed they will absent themselves during the carding process. I have no idea if what I have done is right but it has worked well for me and I’m very happy with the result and it seems a good compromise. And at least it didn’t turn into felt!