I have put off writing this as I have been, quite frankly, too devastated by the awful calamity that has been imposed upon our country by misinformation, lies and scaremongering. I’ve been looking towards Europe a lot during the run up to my fellowship, and that the ease and opportunities I have taken for granted might not now be available for those in the future, fills my heart with utter sadness.

Before all this awfulness happened I spent last Monday having a fabulous day. A while back I was contacted by the conservation team at Harewood House, a stunning eighteenth century stately home here in Yorkshire. I was invited to join a panel to debate the ethics surrounding the conservation of a pair of eighteenth century Axminster carpets. I was a little unsure at first, not clear what I could contribute as a non-conservator, but the more I looked into the issues they were facing, and the effort they were going to to make the right decision, the more I realised that I wanted to get involved.

The carpets are in a particularly sorry state. There are a great deal of repairs undertaken over the years, but many are now threatening the longevity of the carpet. Some, for example, are causing unhelpful tensions, others have been done with inappropriate materials, there has also been extensive use of adhesives. The carpet in the Yellow Room is currently reverse rolled and thus displayed pile down, the lining on show and it looking like, as mentioned by one staff member, like a  crime scene. However interpretation materials are clearly available to explain what is going on, and to highlight particular areas of concern. There is also a questionnaire asking visitors for their views towards the future of the carpets. 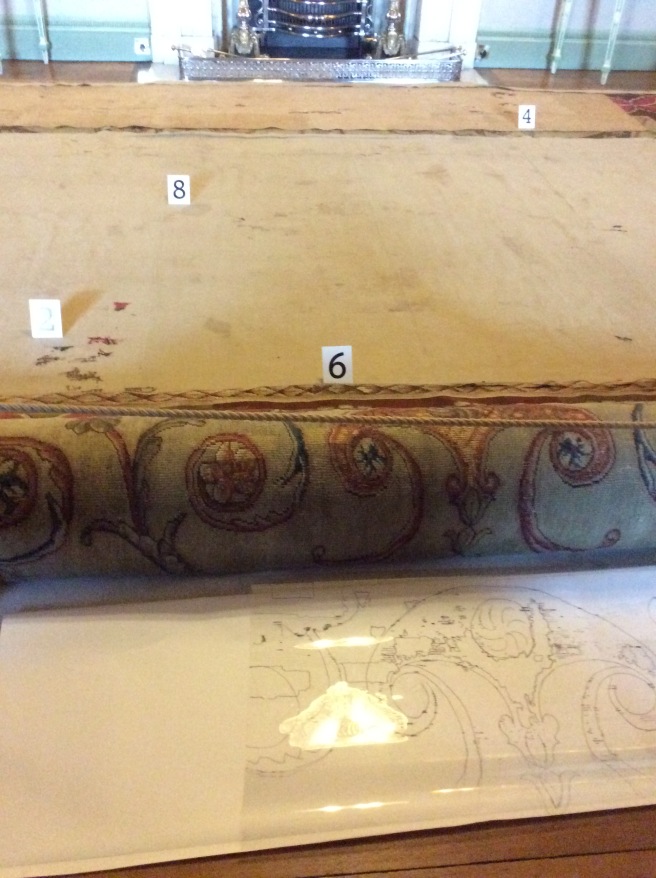 A number of issues are involved. Should it be conserved? What gets conserved, what doesn’t? Should the repairs remain, or be removed, are they not a legitimate part of its story? Should the carpet be renovated to look ‘new’ or should it be left as it is? Should it in fact be put in storage, and should a replica be made?

Although I wasn’t there to contribute as a conservator, it was a good excuse to read round the subject, especially around tapestry conservation and to get a grasp of something regarding the ethics involved in conservation, something not entirely unfamiliar thanks to my previous incarnation as an archaeologist. It was readily apparent that one particular aspect that Harewood faces is that the carpets form an integral aspect to the design of the rooms in which they sit. They reflect the design of the ceiling, just as Robert Adams envisaged. Any changes to the carpets will affect the whole.

I’m not in favour of reproductions, I want to see the work of the original craftsmen, my professional ancestors, that is what they have left us, a replica involves a different conversation with different people. But anyone involved in tapestry would have to have had their head in the sand to not know there has been a set of reproductions made for the refurbished rooms at Stirling Castle. These seven tapestries were woven over twelve years by a team of nearly twenty weavers. Whatever one’s feelings about the tapestries as replicas (they are based on fifteenth century Unicorn Hunt tapestries at the Met), and although much of the weaving took place behind the scenes at the studios in West Dean, tapestries were also concurrently woven in situ at Stirling Castle, in full view of the visitors, a great opportunity for public engagement. But unlike carpet weaving, the techniques of the 21st century tapestry weavers were little different to those of the original craftspeople, lending some element of authenticity to the new works. But of course, any carpets made now to replace the Axminster carpets would be woven in an entirely different manner to those woven centuries ago.

Anyone interested in the arguments regarding ‘authenticity’ and the making of the Stirling tapestries, do check out Caron Penney’s excellent article, Rediscovering the Unicorn tapestries in  Gordon et al 2014 Authenticity and Replication: The ‘Real Thing’ in Art and Conservation published by Archetype.

I am not going to go into details of what was discussed, Harewood will be producing that in due course. But I can report it was a fascinating day. We were very much welcomed, and the discussion and debate was vibrant. On arrival myself and the other panelists were given a tour of the house, prior to a fascinating discussion by Rosie Hicks. After lunch there was a talk by Tabitha Mchenry who has been studying the carpets and then the debate itself. My fellow panelists were Dr Crosby Stephens, a textile conservator looking after the carpets, Frances Hartog, the senior textile Conservator at the V & A and Caroline Carr-Whitworth, the curator at Brodsworth Hall. We were chaired by Professor Anne Sumner an advisor to Harewood and the Head of Cultural Engagement at the University of Leeds. The event took place in front of a largely invited audience and was part of a series of events to mark the Yorkshire Year of the Textile. I was really thrilled and honoured to have taken part.

The whole event was incredibly well organised and although no immediate answers may be apparent it is clear that once the decision is made, it will have been done after extensive consultation with a very wide group of people. It is nice to see that in the UK, informed decisions are still possible!

Meanwhile I’ve been working on a new cartoon for a new tapestry for Art in the Pen and which will return to the full width of the loom. The loom has been re-dressed – not a small task as I tried to use as much of the left-over warp as I could; would have been easier to start afresh!

And if you want to know how long it takes to wrap a tapestry to post to a gallery, it is about a day, 5 rolls of poppy plastic, a great deal of cardboard and about two rolls of kraft paper. My tapestry No Longer Mourn will be amongst the work of 24 artists at Craft in the Bay, the line up looks spectacular, the work of Gizella Warbutron in particular looks amazing. The exhibition, Weave, will run from 16th July to the 11th September.

Anyway, cheerio for now, from a still slightly deflated me x