I have been enjoying an unusually clear block without events and this very very precious time has given me the space to focus on my research and making it manifest on the loom. And so I am very sorry for the extended cliff hanger from the last post.

I had only planned a few days in Switzerland, not least due to the expense (I think it was about £16 for a fast-food burger – soon to come to a certain little post-Brexit island near you). I was also conscious that the largest collection here, housed at Berne was still undergoing conservation and would be for some time to come. My other destination was Basel which was incredibly welcoming with free public transport for visitors, and my accommodation, above a restaurant, was far more comfortable than I was expecting and across the square it overlooked was my reason for being here, the museum in a converted church and now housing a large collection of Swiss made tapestries. Now then, a lot of planning goes into this, and I try to coincide travel with when museums are closed. But it had escaped my notice until I was in Germany that there was a bank holiday in Switzerland on one of days I was there, there was no hint of this online, and it promised to be a bit of a spanner being as I was only in Switzerland for a few days as it was. Fortunately it turned out the holiday was only recognised in some parts, and I changed my itinerary and headed to Bern first.

It was raining, in fact it was pissing it down, so I was in a bit of a mood. I had also by now literally worn a hole in the sole of one of my shoes so I had a wet foot. And the tapestries on show were a little limited, which is what I was expecting, and I couldn’t really engage with them aesthetically. There was however a mahoosive millefleur tapestry, and I saw how awe-inspiring a tapestry like that might be, lit by candles. I left after a few hours and stood on the steps of the museum. I could allow my soggy sulk to continue and head home, or I could head over to Thun. It was on my itinerary because the town had been brought to my attention by a fellow weaver. But it was kinda in pencil, as I really didn’t know what was there and there was naff all online, it would be a place I would go to if I had time, which was going to be unlikely. But I am exceedingly proud to report, I straightened my back, I pushed back my cagoule hood, I embraced the rain, I whipped out my europass and to Thun I went.

It was here I saw my very first alp. An actual alp with snow on it. The town was surrounded by them. The rain had stopped and it turned into one of those grey skies that highlights the colours of everything beneath it, including the fast running river, sapphire blue. The tops of the alps were cloud covered, adding to their enigmatic beauty. High above the town was a castle straight out of a Disney movie. It was magical and needless to say my mood was entirely gone. There were some steps through the town up to the castle. When I say some steps, I mean a coronary inducing trek that makes people who fuss about K2 look a bit silly. I made it, and without medical intervention.

There were three tapestries in the castle. The smallest collection I visited, but also one of the most fantastic. The Duke of Burgundy did a runner at the Battle of Grandson in the fifteenth century leaving behind a war booty including the tapestries that makes up the bulk of the Berne collection. There was at Thun a heraldry tapestry that formed part of this booty, part of it was at Berne, but a massive part here. It was fantastic, obviously rather repetitious, but the rendering of the creatures was fantastic. It was also interesting to see the differing damage over time caused by the different colours, much of the brown areas now little more than warp. 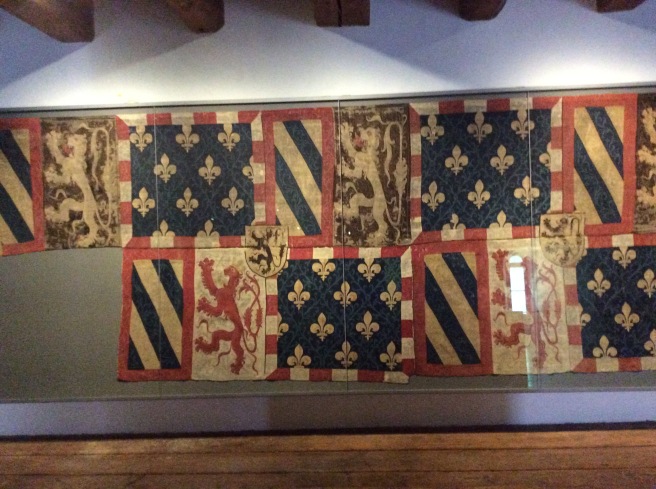 There was also a fifteenth century altar front which was woven in Basel and provided a hint of those waiting for me behind the currently closed doors of the museum. This tapestry was once mistakenly thought to belong to the war booty hence its survival. 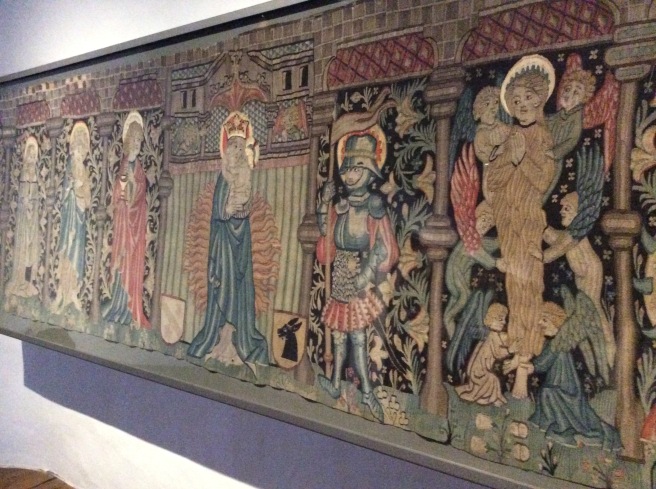 The third tapestry was another altar front but woven more locally and was used in the parish church in the town. Dating to around 1300, it was one of the oldest I got to see and consisted of medallions flanking St Mauritius, the patron saint of the town. The tapestry was remarkable for its boldness and for the the use of stitching to render some of the design and detail. I’m not normally a fan of embroidery on tapestries but here the boldness of the tapestry and the delicacy of the stitching worked incredibly well together. 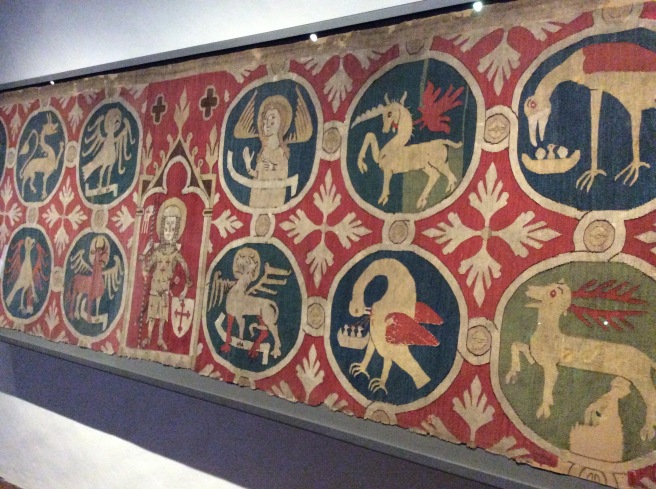 I went home to find there had been an anti-fascist rally in the square outside my window, the museum had a huge spray painted banner across it and there were still a few remnants of stalls being packed up, as I searched for a source of wifi. I have to say the hotel’s was rubbish as was the Starbuck’s, my usual go to place for uploading images. Matters were somewhat sticky as my iPad was playing up, the screen switching off when I touched certain areas of the casing, there was clearly a screw loose, and in the iPad too. Getting the images somewhere secure was a priority and I was glad for a memory stick I could use with the iPad and get a back up there at least. The infallibility of the iPad was the one thing I had not prepared for.

The following day I readied myself to make the trek across the square to the museum. It is fair to say that I entered tapestry heaven. There were heaps and heaps of tapestries in the specially designed gallery. It was, quite frankly, overwhelming. Most had been woven in Basel and it was astonishing to see such a homogeneous collection. The tapestries were relatively narrow being as they hung above furniture rather than having to decorate a whole wall. They were also notable for their secular nature, and the intense patterning over every inch. Also breathtaking (you can see now I was heading for some sort of dyspnonea event) for their astonishing use of demi duite, in some cases it was used as a small highlight, in others it covered whole areas, they were also interlocked. The time and skill that went into these tapestries, was, well, breathtaking.

But understandably the lighting was very low. The glass that once protected the tapestries had been removed and replaced by alarms that were incredibly sensitive. I couldn’t get anywhere near enough to the the tapestries to see them in any detail, it was fine for the casual visitor, but I just couldn’t get close enough to see the weavers’ hand. I had by now also attracted the careful eye of one of the security guards. It was incredibly frustrating. I had been in contact with the curator but had been reluctant to arrange a formal meeting as I was so unsure of what my itinerary would be and did not want to mess anyone about, but I did email her regarding my plight and with astonishing kindness she met me in the gallery with the promise I would not be arrested should I set off the alarms. Even more,  the following day, before the gallery was opened to the public she would disarm the alarms and arrange some decent lighting. I spent the rest of the day with the tapestries doing what I could and was invited to make use of their library as well. The next day I returned as arranged. I cannot tell you how lucky I was, how privileged, what a fabulous chance it was to see these tapestries under lighting. The detail and life in these tapestries was utterly astounding. Talk about leaving the best til last, an experience I will never forget.

It marked the last day of the travelling. It had been a very hectic few weeks. Nonetheless the feeling of this leg was different, I was able to spend longer with some collections, and the tapestries I saw here were very different to those I saw in France, Belgium and New York. And when I have returned from these trips before I have usually had to hit the ground running to get ready for an event or other. But this time I have been able to properly digest all I have seen and allowed myself to experiment at the loom and this has resulted in me finally becoming the weaver and the artist I have always wanted to be, and I will talk about that in the next post. But what I will add is that of course this blog is merely a report from the ground as it were, a more formal and detailed report about the research was due and this too has taken up some of my time. It took a while to figure out the best way to write it, a place by place account not unlike having to sit through some aged relatives holiday slides, yet something entirely technique focused robbed this experience of its breadth. Instead, not least because I picked up a copy of de Hamel’s Meetings with Remarkable Manuscripts in Nuremburg, I have focused on a selection of tapestries and used those to jump off and explore the themes raised by this research. Anyway, that is now all done and submitted I will be sure to let you know when the WCMT make it available.

Once you are a Churchill Fellow, you are a Churchill Fellow for life. And I have to say I know this experience will stay with me for ever and will be feeding into my practice for the entirety of my weaving life. There is much more work to do, not least the cataloging of the archive of around 14,000 images of the 170 tapestries I got to see. I have also learned so much about myself and what I am capable of. I am incredibly grateful to the WCMT and to folk who travelled along with me, including the readers of this blog and all those who have supported me along the way.

One thought on “Churchill Fellowship 7 – Switzerland”

This site uses Akismet to reduce spam. Learn how your comment data is processed.